The unit participated in most of the significant campaigns of the Vietnam War, including the Gulf of Tonkin incident which precipitated increased American involvement, Operation Steel Tiger, Operation Tiger Hound, the Tet Offensive, Operation Commando Hunt, the Cambodian Campaign, Operation Lam Son 719, and the Easter Offensive.  This event will pay tribute to these warriors!

Evolution #10 R&R (Food and war stories Saturday Night)
Evolution #11 POW Camp Raid (Sunday Morning, Paintball)
Tie-breaker if needed
ENDEX 1000-1100 Sunday
Will there be sleep? Hell No. It will pay to be a winner.
Price $75 including ammo, paintballs, and patch.
Click on “Register” above and then pay below.
Really looking for multiple teams of 5, but we will make teams based on registrations.
The Fox Crew (Lyell, Lightnin, Howard, GRP, and Copernicus) awaits…. 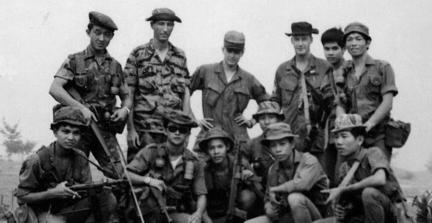